If you have ever dedicated a day on a farm and watched cows, you are likely to see them doing only one of the following three things, either be sleeping, eating, or chewing. Most of the time they look like they are munching on gum, even if there is no food around.

You have probably heard that cows have four stomachs. That is almost correct but not exactly. So how many stomachs does a cow have? The answer to this question and to why cows chew all the time will be clearly explained below.

The ruminant digestive system of cows

Cows are well-known for their unique digestive system.

For one thing, they are herbivores; hence their diet contains roughage and fibrous organic material which are hard to break down and digest. They mainly eat corn silage, hay silage, grains, and soybean meal.

Secondly, cows chew the cud regurgitated from their rumen. When they graze on grass, they just swallow everything straight down to their stomach without even chewing it.

Due to such reasons, they are classified as ruminant animals.

Read more: How Long Do Cows Give Milk?

How many stomachs does a cow have?

Cows have only one stomach, but it consists of four specialized compartments. Each compartment serves a special role in the digestive process. That is why people often say that cows have four stomachs.

Fun fact: Ruminants include cows, sheep, goats, buffalo, deer, elk, giraffes and camels, etc. These animals have a uniquely different digestive system from ours. Instead of one compartment to their stomach, they have four. However, not all animals with 4 compartment stomachs are classed as ruminants, e.g. Cachalot Whales.

So, why do cows have 4 stomachs?

Previously mentioned, cows are categorized as ruminant and their menu is primarily made up of grass. That explains why they have a different way of food digestion in which the food is transferred from one chamber to another in the stomach and each chamber plays an important role in digesting tough food.

This digestive system enables cows to regurgitate and rechew the plant material they have grazed, then break it all down into much simpler components and allow more of the nutrients to be extracted from it and absorbed by their body.

Four compartments of a cow’s stomach

The four compartments of a cow’s stomach are rumen, reticulum, omasum and abomasum. 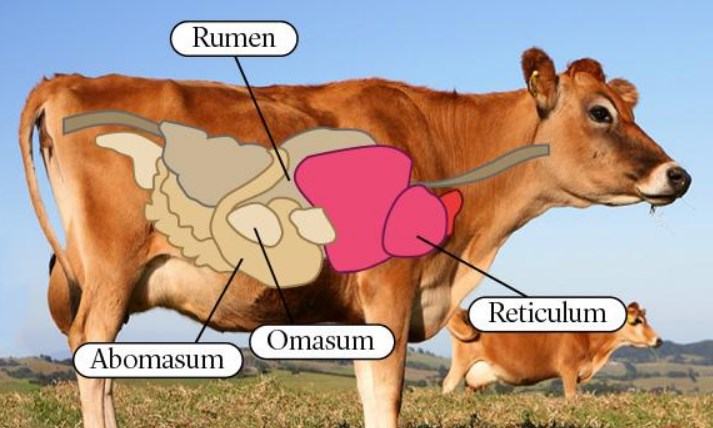 The first fore-stomach is the rumen, also the largest compartment. It is considered a vat for feed because it can hold up to 25 gallons or more of material based on the size of the cow.

From here, the fermentation process begins. The food will be regurgitated, chewed and re-swallowed multiple times, while microbes will help with the food break down. Gases including carbon dioxide and methane, which the cow burps out, are also given off during this process.

This second compartment is where heavy or dense feed and metal objects consumed by the cow are trapped.

Here, the food combines with the cow’s saliva and produces cud. Cows bring these pieces of cud back into their mouths and chew them entirely. After the cud is chewed and swallowed again thoroughly, it is passed back down into the rumen for further digestion before being sent to the next compartment.

This is where all the water from the cow’s meal is absorbed.

This chamber is considered as a very clever part of the stomach as there are many different layers to it (like pages of a book), meaning that the surface area is enlarged or increased and can absorb more of the important moisture.

The abomasum is also called as the “true stomach” since it is very similar to the human stomach. This is the only compartment connected with glands.

In this final stage, the food digestion takes place when the glands release hydrochloric acids and digestive enzymes to digest protein and starch, help to extract any essential nutrients that have not been processed in the other fore-stomachs.

Now that you know how many stomachs that a cow actually has and what goes on inside them. That gives an explanation of why their digestion process takes so much time. For your information, a cow can spend six to eight hours or more each day eating.